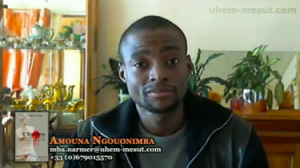 “Female Genital Mutilation is first of all an instrument to oppress women – and we need to understand this phenomenon in that context.”
With “L’Excision aux sources d’une longue tradition et coutume Eurasiatique”, here is a new book out about the issue of Female Genital Mutilation – and it is suited to turn the courant perception of FGM upside down: The author, Amouna Ngouonimba, takes the readership to a journey through different eras – showing that the practice of Female Genital Mutilation is far away from being an “African tradition” – as frequently claimed today. It is much more the result of a violent process of continued imposal of foreign laws, traditions, norms and religions, especially by Eurasian/Arabic occupants.

Also, the author is going back to the veritable roots of “African traditions” – unveiling social structures which are incompatible with violence like Female Genital Mutilation. He describes how these original structures have been undermined, disbanded and replaced by the structures of the different foreign occupants – and how it became possible that FGM has been spread over the continent.

Amouna Ngouonimba is originally from Congo. Today, he is living in France and he is engaged with organisation Uhem-Mesut which aims to detect, to rehabilitate and to re-adopt the original ancestral African Traditions as a source of sustainable amelioration of the social conditions at the African continent (Kemeta).

TaskForce: Amouna, with your book about the roots of Female Genital Mutilation (FGM) you would like to contribute to the efforts to abandon this violent practice. Why is it so important to stop FGM? Amouna Ngouonimba: We do indeed dedicate our courant book to the efforts to stamp out the scourge called Female Genital Mutilation from Africa (we use the ancient word “Kemeta”). In this sense, we deliver a concrete solution by going to the roots of the problem. By fighting Female Genital Mutilation, we fight the “animalisation” of women – of our mothers – and there are numerous reasons motivating us. Let me give you just three principles:

2. We are well aware about the consequences and all trauma caused by these mutilations: The destruction of the female genitalia does not only lead to various problems during pregnancy and childbirth but kills her libido and sexual pleasure. Not to forget all the girls who die after being subjected to these barbaric acts. In fact, Female Genital Mutilation deprives women of the pleasures and excitements of a “normal life”. That’s why we openly denounce this practice that leaves our mothers handicapped.

3. If we go back to the real “African Tradition”, we find women to be sacred and divine – not only in simple slogans, but in effective instructions and handlings: Matriarchy has been the fundamental base of every social organisation in Africa: Women are the pillars of the society. Therefore, to attack and aggress women does not only mean to detract her dignity, but also to directly menace the spiritual power which consolidates and organises the society. Today, Africa (Kemata) appears faint because women and mothers – the most important force of the societies – suffer continued violence. So, there is no other solution than to end all forms of violence against women – as the survival of our social model depends on it. That’s why, it is so important – and even indispensable – to stop Female Genital Mutilation.

TaskForce: What can you say about the intention/s of Female Genital Mutilation? Why is FGM perpetrated against female children?

Amouna: There are three basic reasons to be found: Submission, Disregard and even Objectification of women. The origin of Female Genital Mutilation can be found in Eurasian societies (i.e. ancient Greece and Rome) – where women have never been treated like adequate human-beings – but more regarded as animals, objects or slaves.

The reflection of this attitude towards women, we find in the very common opinions of the Greco-Roman philosophers like Plato and Aristotle, whose thoughts I share in my book. Regarded as a thing or even piece of furniture, women are delivered to the disposal of men:

With the Greco-Romans, the patriarchal system allowed the men/the fathers to have the right about life or death of their women and children. Consequently, the mutilation of women is based on male intentions and interests – in the context of submission and objectification of women (which also can be found in other manifestations, such as chastity belts, isolation of women in harems to fully control their lives and their sexuality, and even the castration of women):

For instance, there was (and still is) the belief in Eurasian societies that the genitalia of women are ugly and therefore need to be mutilated. Also, the mutilations have been implemented to control the libido and sexuality of women…

Female Genital Mutilation is first of all an instrument to oppress women – and we need to understand this phenomenon in that context.

TaskForce: In your book, you show that Female Genital Mutilation is NOT an “African tradition” as often referred to – but an Eurasian practice that has been imposed to African societies. How did this process happen?

Amouna:  Right, in my book I am citing the historical facts that explain how Female Genital Mutilation (and other forms of violence against women) have been spread through the African continent: African societies have been suffering various aggressions by foreign offenders coming from Eurasia. For instance, the ancient Egypt has been the target of different invasions, amongst others from the Greco-Romans (Ptolémies). One result of these occupations was the violent inforcement of foreign laws and norms including Female Genital Mutilation (which have been a “flourishing industry” with the Greco-Romans).

The Religion of the occupant must be considered to have played an important role as it was a perfect vehicle to impose and to establish the new foreign legislation and norms, such as the mutilation of women: As FGM has been practiced in Arabic countries, those African societies who underwent the implementation of the Arabic religion – Islam – ended up by adopting the mutilation of women too.

This is the reason why we can clearly see at the cartography, that in those African countries/ societies that adopted Islam as religion, the highest prevalence of FGM is to be found.

To order the book (in French) for 24,95 € (incl. mailing expenses) please send an e-mail at:  mba.narmer@uhem-mesut.com

The wirement of the amount should be adressed at Uhem-Mesut:

The second part of the interview is comin soon…

Please, find here a peronal intverview (in French) with the author: