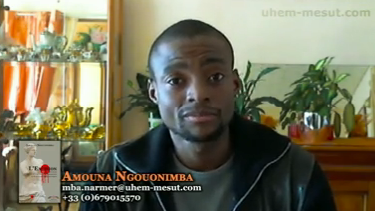 With “L’Excision aux sources d’une longue tradition et coutume Eurasiatique”, here is a new book out about the issue of Female Genital Mutilation – and it is suited to turn the courant perception of FGM upside down:The author, Amouna Ngouonimba, takes the readership to a journey through different eras – showing that the practice of Female Genital Mutilation is far away from being an “African tradition” – as frequently claimed today. It is much more the result of a violent process of continued imposal of foreign laws, traditions, norms and religions, especially by Eurasian/Arabic occupants.

Also, the author is going back to the veritable roots of “African traditions” – unveiling social structures which are incompatible with violence like Female Genital Mutilation. He describes how these original structures have been undermined, disbanded and replaced by the structures of the different foreign occupants – and how it became possible that FGM has been spread over the continent.

Amouna Ngouonimba is originally from Congo. Today, he is living in France and he is engaged with organisation Uhem-Mesut which aims to detect, to rehabilitate and to re-adopt the original ancestral African Traditions as a source of sustainable amelioration of the social conditions at the African continent (Kemeta).

In April 2011, we had a chance to talk to Amouna, please see the first part of the interview >