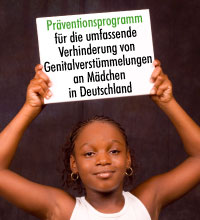 Melanie Feuerbach talked to Marie Nareku in February 2009 about how to protect girls, the role European and African governments play and the TaskForce´s approach to protect girls in Germany

The TaskForce aims to protect all girls in Germany from Female Genital Mutilation (FGM), who are at risk. We want to stop FGM immediately and not allow any girl to be mutilated. What do you think about this?

Marie Nareku: This is a great aim. Me and the people here in my group, we support this. We are the ones suffering here in Africa and working on the grass root level against Female Genital Mutilation. And I say: There is no other answer than protection of girls and eradication of this violation of human rights. FGM is a mutilation and it should be stopped immediately, all over the world, also in Europe and other places. The governments must protect the girls. This is their duty. There is no excuse. They really need to protect the girls.

Please, don’t think education of the parents is the only solution. There are many educated parents under the pressure of the family, so that they don’t protect their girls. So there must be protection by the government and NGOs. So it is a very innovative and helpful work. In the first view, some people might have a problem with it…, but there is no other way to eradicate Female Genital Mutilation and to protect girls.

One measure is the mandatory genital check up and obligation for doctors to report. What do you think about this measure?

Marie Nareku: This is very good. I feel the mandatory check ups should be for everyone. The genital check ups will really work a remedy. Because that is the only way the people will fear the consequences…I am sure people will then always fear to perform FGM, especially the immigrants from Kenya living in Germany. They will stop doing it when the government is serious and when the government is going to support the Task Force activities.

What do you think about families who live in Europe or the USA now and come in holidays to Kenya to let their daughters mutilate?

Marie Nareku: I always feel that it is criminal and very discouraging for us who are running the grassroots campaigns in this place and especially in the community. We, the social workers, feel really bad, because we expect people who are developed to be a good model. Those people who are gone to developed countries and then come back here are real role models to all the community members: But if they come here and accept their girls to be mutilated – and then take them back to the developed countries – what could we learn, here in the still developing country? It should be also named Female Genital Mutilation, because it IS a mutilation. There should be no discussion about it.

What does this “Mutilation-Tourism” mean to your work?

Marie Nareku: This is very discouraging for us and our work. In developed countries, why is there no way to protect girls from the mutilation? I don’t understand that. You know, the target group and the government should protect the girls of this group. The girls have a right to be protected! When there is no protection in Germany, this is a very serious problem for us here in Kenya, because we are even still in development.

Imagine, you would have grown up in Germany and your parents would have wanted to bring you to Kenya during holidays to let you undergo the mutilation – but they would have been stopped by an organisation like the Task Force: Until your age of 18 you would not have been allowed to see your family/grandparents in Kenya because of the FGM-risk What would have been more important for you: to travel home or to grow up with an intact body?

Marie Nareku: A hundred times, I would say: To have my intact body! Travelling home and to risk going back with a mutilated body, is too bad. And when I think about the deformity and harm that FGM implies, I better would stay without going home, but to live as a role model when I grow up. Being mutilated in the name of “being brought home for holidays”, is a very bad excuse.

In 2006, I have read about a case in Sweden: A Somali father had been arrested because he had mutilated his half-swedish daughter during a journey to Somalia. The father then sold her to an old man after the mutilation, and it took her some years in agony before she could escape back to Sweden. Indeed, there was no control in Sweden to prevent her from being brought to Somalia! This is a very bad example to say: The governments in Europe should finally take the responsibilities for these girls! I think that the governments are responsible for protection of all the girls from the Female Genital Mutilation. And I hope that more women and men come out to work for that protection. This will also be an encouraging moment for us African women to strengthen our engagement for development and empowerment…

Thank you very much, Marie Nareku, for this illuminative conversation.