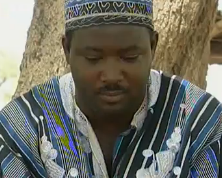 In his home country Burkina Faso Max is one of the most popular jazz musicians and in 2007 he was awarded the prize for the best jazz performance.

For many years the artist and human rights activist has been fighting female genital mutilation in Burkina Faso through his music and also by organising information events. Since 2006 he has participated annually in the Human Rights Week in Burkina Faso and he has held discussions, presentations and events at schools and universities.

In his songs he often critically deals with violence of genital mutilation and calls:

“Lets stand up – lets fight female genital mutilation” (Pagba boango kiesgo, 2007) and he speaks his mind: “It’s a human massacre…It’s a form of male’s domination on women…No one has the right to oppress a woman…” (Arreter l’excision, 2007).

I call all Africans – please stop it!” Max urgently appeals in his song “Freedom”, which is published for the first time on VISION ACTION CHANGE, our charity compilation album against FGM:

Female Genital Mutilation is a crime, a human crime that we all men and women have to stand up and fight against it.

You will find news about Max, his engagement, his music and the serious situation in Burkina Faso on his facebook page.

Watch Max´ Videos for the abandonment of FGM: